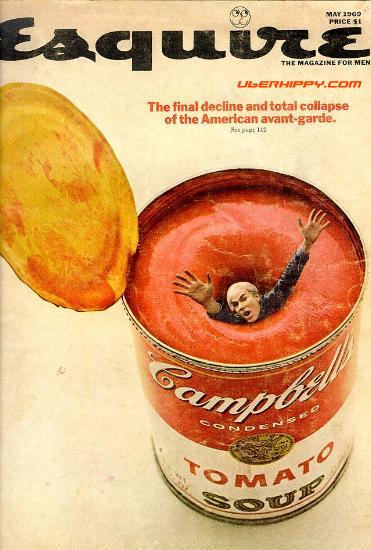 Not the sort of folks you are likely to see on your home color screen, right? That's because the networks don't think you're ready for them. But what do they know? Sierra Bandit and her pals in the New Theatre (or, to be more precise, the old avant-garde) are talking to you, reader, trying to shock you into a keener awareness of the evil of your days. Trouble is, they make the mass-media nervous and consequently can't get at you. So there they are, trying to do their thing, and there you are, watching the late movie. Within this void superstars come and go, for the mortality rate is high. They are neither born nor made-they just happen, and after a while they either stop happening altogether or go on to something else. To record this significant moment in our cultural history, Esquire has assembled several New Theatre groups and their stars to pose before the Kodak Instamatic camera of the Mathew Brady of the movement, Andy Warhol.

Unflinchingly, Warhol trained his camera on these enthusiastic young people and shot everything, including himself. One group arrived for the session and immediately disrobed; another stomped on a piece of sculpture in Warhol's Factory; yet another hit him for dinner at Max's Kansas City; and one more ate the New York Daily News before his very eyes. "Everyone sure is wild these days," Warhol said, turning in his finished art in pink drugstore envelopes.